Are public attitudes towards homelessness changing? 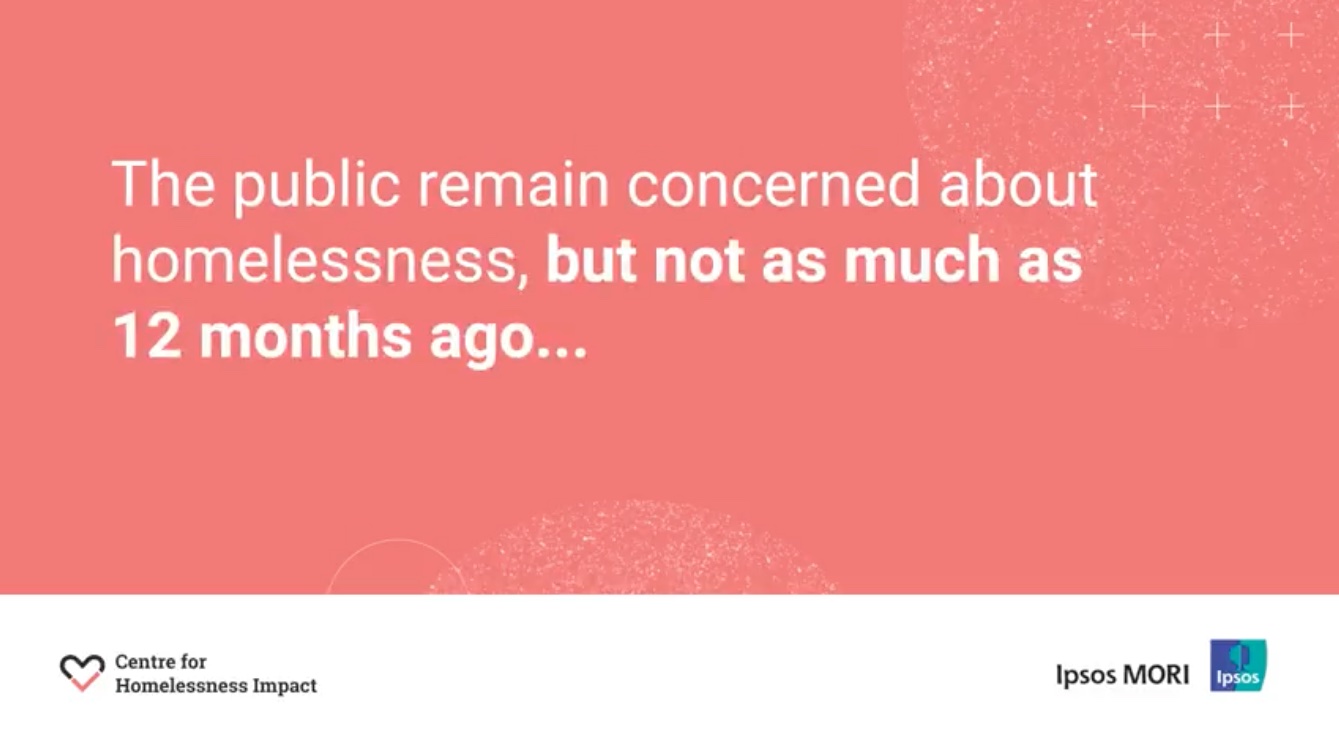 In a 2021 survey conducted by Ipsos for the Centre for Homelessness Impact, results show that there is weakening public concern towards homelessness, with fewer people concerned about the issue, and a fall in sympathy for people affected by homelessness.

The relative shifts in attitude in a series of issues linked to homelessness are highlighted in the annual poll, which seeks to track changes in public perceptions of homelessness. The research reflects the Centre’s interest in better understanding the public’s knowledge and attitudes towards homelessness, and the perceived difference that policy and evidence can make.

Homelessness is perceived as a serious problem by the public who expect it to get worse and are supportive of a range of policies designed to address it. However, between 2020 and 2021, there was a trend towards weakening concern and sympathy towards those it affects. It found:

There is strong support for clarifying what “ending homelessness” means, with 76% in agreement, and the same proportion (75%) agree we need ways of measuring progress towards ending homelessness. Across the UK, seven in ten (71%) support the implementation of a similar policy to ‘Everyone In’ during winter periods - providing funding for local councils to support people experiencing street homelessness or in shelters to move into hotel rooms and emergency accommodation – and support is similarly high in England, Wales, Scotland and Northern Ireland.

Attitudes and expectations are fairly similar across nations, however, those living in Scotland and Wales are more likely than average to think that homelessness will increase in the next 12 months. Two-thirds (66%) in both countries expect this to happen while 61% think this in England and 64% in Northern Ireland. People living in Scotland are more likely than average to agree that ‘as a society we do not pay enough attention to homelessness’.

Just under three in ten (28%) say that they have experienced homelessness themselves (10%), or through a family member (10%) or close friend (11%). This increases to half (47%) of those aged 16-34 – a significant increase from three in ten (34%) in 2020. On average, the public believes that 14% of adults are currently homeless in the UK. In reality, the proportion of the population experiencing homelessness is less than 0.5%.

‘Our survey with Ipsos gives us a unique barometer of popular opinion over time. It’s important that we report its findings honestly, good or bad, to create an evidence base on public perceptions of homelessness.

'The movement in opinion on the issue of homelessness might reflect the changing context of the pandemic and is something we should keep a close eye on because we are at a defining moment for homelessness in the United Kingdom. We have seen brave and radical initiatives to protect people experiencing homelessness during the pandemic and significant falls in the numbers of people sleeping out. As Covid-19 restrictions are lifted and the emergency measures are unwound, it is vital that the progress made is sustained and built upon. For that we need public support.’

Poverty is seen by the public as a major factor of many of the problems that can lead to homelessness, but there has been a significant decrease in that sentiment in the past year (73% in 2020, vs 65% in 2021). Although the commonly held view is that homelessness is driven by issues outside an individual’s control, the most frequently selected cause (from a list of 17) is alcohol or drug problems, selected by half. Compared with 2020, significantly fewer people think homelessness is caused by unemployment (19% versus 25%).

Two-thirds (66%) agree that the situation could be helped with more affordable housing, while 69% think that governments should guarantee the right to access decent and affordable housing for all – a slight decrease from 71% and 74% in 2020 respectively.

The 2021 survey involved a representative sample of 2,179 UK adults aged 16-75. It was conducted between 10-16 December 2021. It used ‘booster’ sampling to increase the number of surveys completed in Wales (to a total of 514), Scotland (516) and Northern Ireland (200) to improve our ability to make comparisons. Data was weighted to the known population profile at the UK level.