Homelessness and the pandemic: Toronto 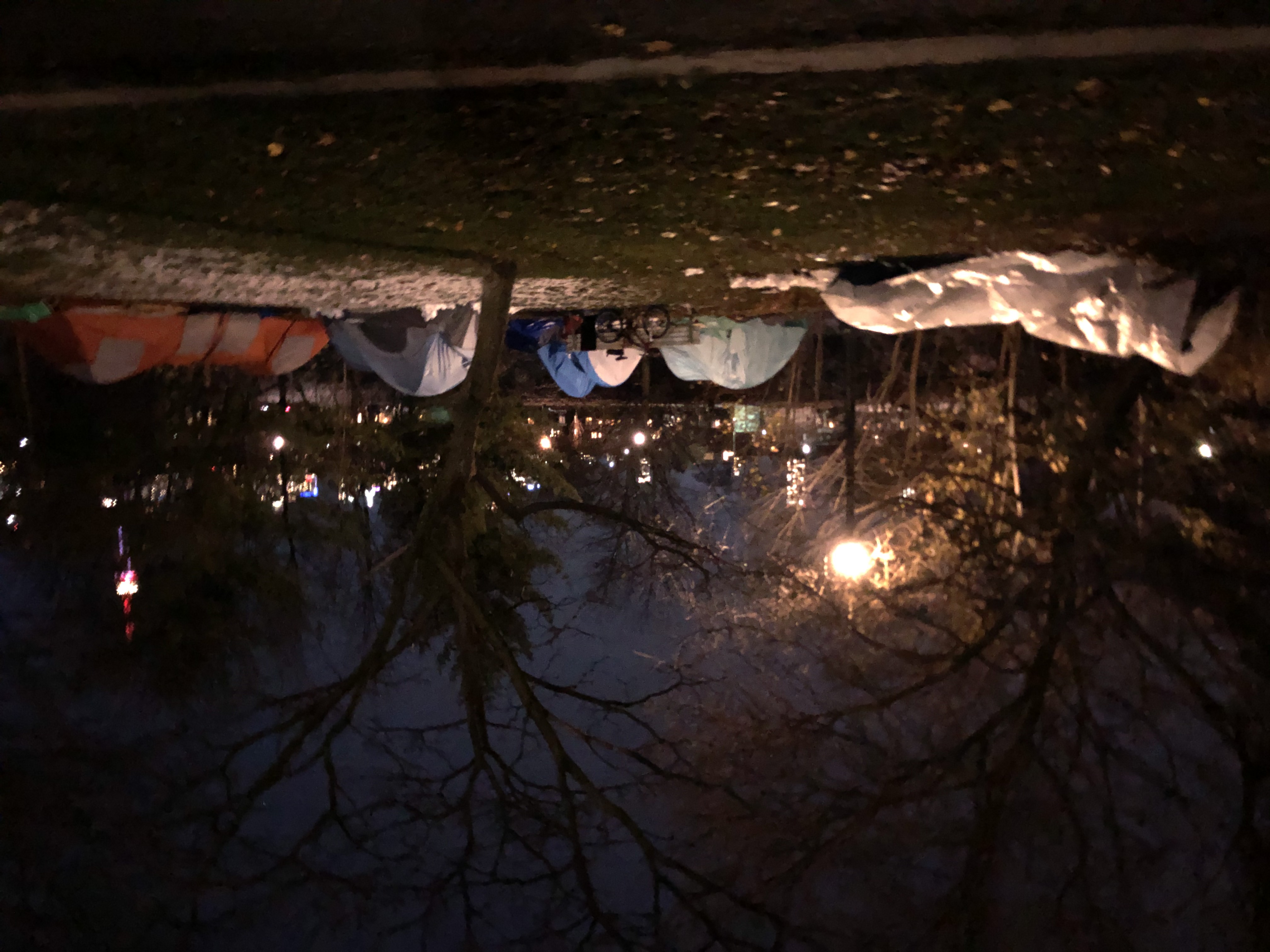 in cold of winter

Toronto is considered to have had the longest lockdown of any city in the world. For almost 400 days since the pandemic began, restaurants, cafes, and other community spaces have been closed or at limited capacity to reduce the spread of the virus. On any given day, over 8,700 people experience homelessness of some kind in Toronto (300 per 100,000 residents). With 75 shelters spread out across Canada’s most populous city (64 run by nonprofits, 11 by the City), Toronto has the largest shelter system in the country, serving over 7,000 guests every night.

This shelter system is at or near capacity every night. So when the pandemic hit, potential guests who called the intake line to secure a bed for the night were met with endless hold music, as shelters cut their capacity to reduce the spread of the virus. Many also left or chose not to enter shelters for fear of contracting the virus, and encampments sprung up in downtown city neighbourhoods in the cold of the Ontario winter. Like many other global cities, by April 2020, Toronto leased 1,200 hotel rooms to support the bursting shelter system. Hand washing facilities and toilets were installed in neighbourhoods with high concentrations of people experiencing homelessness, and a 40-bed isolation centre was opened in another hotel.

But the City’s biggest push to house people was through the establishment of the Rapid Rehousing Initiative, as part of a comprehensive response to move people out of encampments and congregate shelters, and into rent-geared-to-income housing where physical distancing could be achieved. The initiative is a new programme for the city, launched in collaboration with Toronto Community Housing – a corporation that owns and manages approximately 60,000 rental housing units in over 2,100 buildings across Toronto. The initiative has streamlined existing processes for filling units for people experiencing homelessness – the previous centralised waiting list did not focus on housing people experiencing homelessness, and the process was lengthy from start to finish. Now, it takes approximately 7-10 business days from unit identification to a client moving in.

When it comes to housing, with over 98,000 families on the housing waiting list in spring 2022, the lack of affordable housing in Toronto has no doubt been a factor in the city’s high rates of homelessness. Housing costs in Toronto are rapidly rising, making renting prohibitively expensive for the average Torontonian, with 47% of residents paying more than 30% of pre-tax income on rent. According to 2022 data from Rentals.ca, a 2-bedroom apartment in Toronto costs an average of $2,715 with a year-on-year increase of over 11%, compared to the country average of $1,824 CAD (£1,100).

The Toronto Rent Bank (TRB) – a partnership between the City and nonprofit – provides grants to eligible Toronto residents who are behind on their rent or need help with a deposit. During the pandemic, the City made significant changes to the TRB respond to the needs of low-income households, which included an additional$5 million (£3 million) invested, the conversion of the programme from a loan- to grant-based system until March 2022, increasing annual household income eligibility by $15,000 (£8,750), and freezing all existing loan repayments.

While the city says roughly 430 people have been housed directly from encampments in the last two years, data shows that only 9% of former encampment occupants who came into the shelter system between March 2020 and July 2021 (139 of 1,536) had moved into permanent or temporary housing. Furthermore, of those who entered shelters, nearly half (48%) are still sleeping in shelter beds, while around 5% have left for “known locations” like healthcare facilities, while another 38% have left for unknown locations including outdoor encampments. However, recent evaluations of harm-reduction programmes in Toronto found that the integrated model for service delivery in shelter and residential settings kept people healthy and safe during their stay, and helped to prevent overdose-related deaths.

As physical distancing measures were enforced, Toronto also witnessed a substantial rise in fatal opioid overdoses and related shelter deaths, from an average of one per month in 2018, to four per month in 2020. The city attributes this to a number of factors, including a higher number of people consuming drugs as a result of physical distancing, shelter residents moving to new shelters and purchasing drugs from unfamiliar dealers, reduced harm reduction services, and increased toxicity of the unregulated drug supply. Focusing on wellness and harm-reduction services, a number of shelters integrated on-site health and welfare support services, including distribution of harm reduction equipment (sterile injection and safer inhalation equipment), prescription opioids and/or stimulants as treatment or as an alternative to unregulated drugs, a managed alcohol programme, and safe consumption sites, and on-site pharmacists.

St. Michael’s hospital also launched a wellness-focused initiative, whereby an interdisciplinary team of healthcare professionals conducted phone calls to clients likely to be disproportionately impacted by the pandemic, to assess issues relating to income, safety and food security, connecting people to the appropriate supports. This presented the possibility of intervening on challenges for those experiencing or at risk of homelessness, before they led to consequences such as a return to homelessness or loss of life.

At the end of 2020, the City committed $7.6 million (£4.4 million) to provide harm reduction services to shelter users in a bid to reduce the risk of opioid-related overdoses, including the supervised consumption services in select shelters, mandatory staff training in drug use and overdose prevention, as well as grief and loss support services for shelter staff and residents. Still, the number of fatal overdoses in shelter settings in Toronto continues to climb.

Since the pandemic hit, Toronto has become more aware of homelessness than ever before, with an increase in visible street homelessness (and encampment clearing), a spike in overdoses, and ongoing Covid-19 outbreaks among people staying in congregate shelters. The virus continues to rear its head among the population living in shelters, and the City faces criticism for not doing enough to prevent infection, and prematurely winding down isolation initiatives, which resulted in a spike in cases in the winter of 2021-22.

Much of the work carried out by the City was made possible by emergency funding that the Province of Ontario provided in the form of a social service relief fund that made these interventions possible. While the one-time funding has been topped-up by the provincial government, there remains concern from the City and social sector around what will happen next.

While the status of funding for programmes like the Rapid Rehousing Initiative is currently unknown, the City has taken steps to acquire and convert two buildings (a hotel shelter and former senior citizens’ home) into 334 units of supportive housing – the first of roughly 10 projects funded with over $200 million (£120 million) in federal money to create new affordable homes.

The City is also taking steps to acknowledge and make transparent the increasing challenges relating to homelessness in Toronto. In March 2021, it launched a new data dashboard, which shows inflow and outflow from their shelter system on a monthly basis, as well as showing historical trends over time. Over time, data will be expanded to include more types of homelessness in Toronto, and demographic information will be expanded to include racial and Indigenous identity, and veteran status. This is the most comprehensive and transparent public dashboard of its kind in Canada, which as well as enabling the City to monitor the effectiveness of their interventions, it also opens them up to criticism. Armed with specific real-time data, the City hopes to better target resources, improve processes and system coordination to accelerate and end to homelessness.