Homelessness and the pandemic: Paris 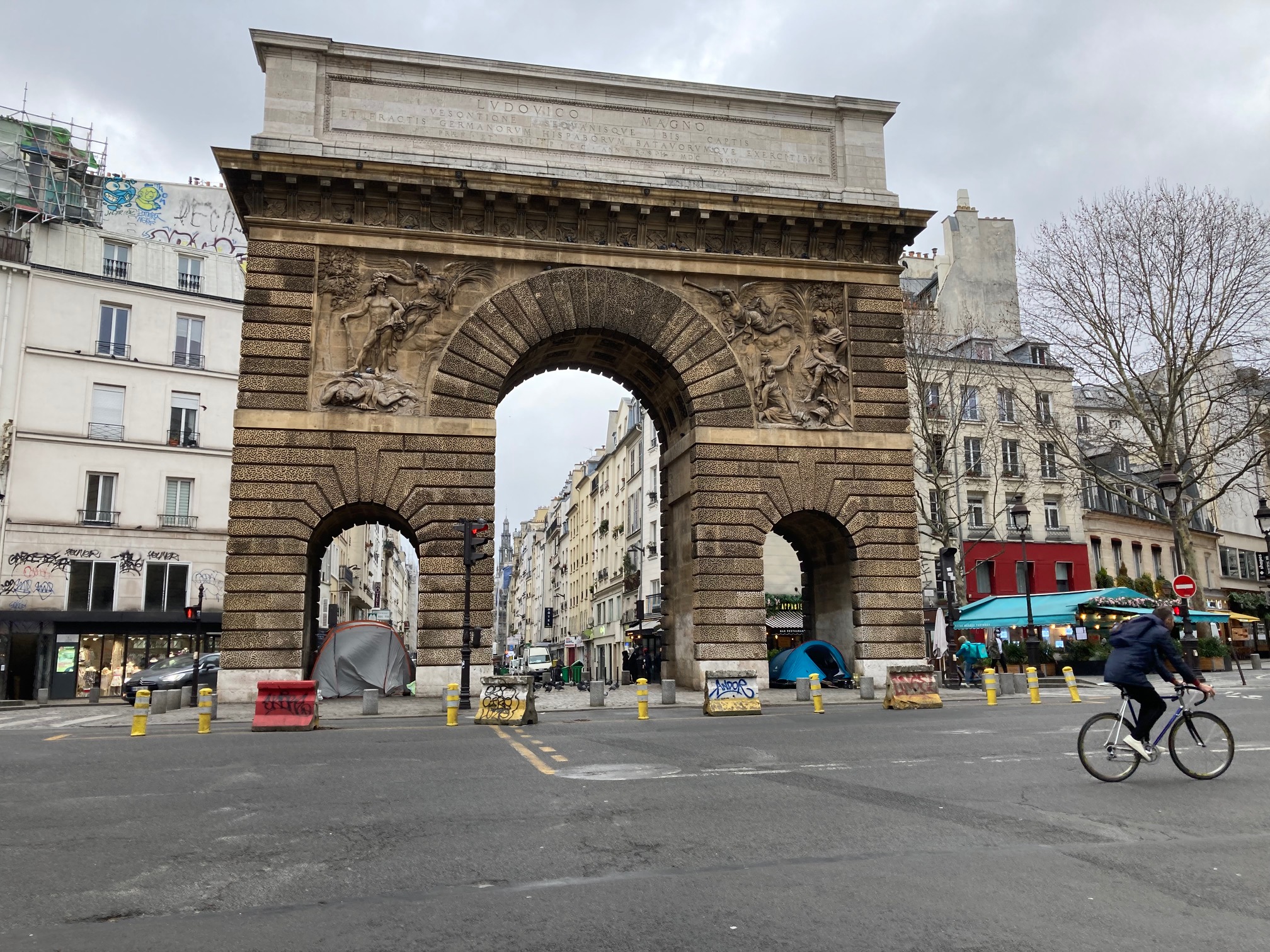 France ordered one of the world’s strictest lockdowns in the early stages of the Covid-19 pandemic. For two months most people were only allowed to leave their homes for essential activities such as grocery shopping.

“We are at war,” President Emmanuel Macron said in a televised address. “The enemy is there, invisible, elusive, and it’s making headway. That requires widespread mobilisation.”

For the approximately 3,600 people who were sleeping out in the centre of Paris at the beginning of the pandemic, based on the annual street-count in January 2020, the services they relied on for basic needs like food, water, and shelter vanished at a stroke. The underground Paris Metro – a common sleeping spot – shut down. Bars and restaurants that typically gave out leftover food were forced to close. Even public lavatories were shuttered over fears they could aid the spread of the coronavirus.

“The whole ecosystem that [those experiencing homelessness] depended on just disappeared overnight,” said Vanessa Benoit, the Director of the Paris chapter of Samu Social, a charity that provides 24-hour hotline services to people experiencing homelessness across France. “There was a real sense of absolute panic and breakdown of services. And almost immediately after that, there was a reaction that we can't let this happen.”

According to Benoit, the wave of urgency that carried the first phase of the pandemic played a key role in being able to act swiftly and effectively,  leading today to an overall 30% decrease in homelessness in Paris.

Addressing the situation head-on meant responding to two main issues:  rapidly increasing the number of emergency shelters, and continuing to provide the same essential services that were available pre-pandemic. Layers of government bureaucracy were unclogged, local charities and non-government organisations pooled their resources under a single umbrella, and distribution centres were quickly set up across the city to provide continued access to essential services like meal and clothing distribution. While emergency housing is funded and managed at the national level in France, the city of Paris played an essential role in speeding up this process, says Christophe Vitu, who works for the Paris city hall’s housing division.

“Even if the city does not have the jurisdiction, you still have situations like extreme poverty happening on our territory. And so, politically, we want to act” said Vitu.

According to Vitu, around 40 city-owned buildings were quickly converted into temporary social housing, providing some 4,000 beds to those in need. The state, meanwhile, swiftly negotiated a memorandum of understanding with the Paris region’s hotel industry to open up rooms to the city’s homeless.

“If we’d had to negotiate with each different hotel, it would have taken much longer,” says Benoit.

With tourism ground to a halt, Benoit says the state was able to negotiate a special rate with the hotel industry that fit within the state’s €2.4 billion (£2 billion) emergency housing budget. Those experiencing homelessness were connected to a call centre that would then provide accommodation, either in a hotel or emergency shelters.

In the centre of Paris proper, nearly 5,000 beds in new shelters and hotel rooms were added.  The greater Paris region of 12.2 million people, meanwhile, increased its number of shelter beds by 37%. Whereas on 31 December 2019, the Paris region provided 70,000 beds, there were more than 96,000 beds one year later.

With Paris under lockdown, the vast network of meal distribution, health services, and other kinds of support for the city’s homeless needed to be redrawn. The network of some 1,700 volunteers that were essential in overseeing these distributions – many of whom were people over the age of 65 – were now being told to stay at home. Meal distribution sites that people had grown to rely on stopped running. But not before sending out an alert to the city hall.

“They immediately told us what the needs were and said ‘big warning, we are closing down. There are people who will not be able to eat,’” said Christophe Vitu with Paris City Hall.

According to Vitu, the city was able to double its food distribution capabilities – from 11,000 to 22,000 meals per day – in the space of a week. Five sites were set up across the city, including the Carreau du Temple in central Paris.

“If we managed to open these large centres in a week, it's because we knew the associations,” says Vitu. In other words, the preexisting bonds between the city, the state, and local associations helped them quickly establish where there were gaps that needed to be filled.

Remarkable strides were made in increasing access to emergency shelters and ensuring continued essential services. Still, the risks related to catching Covid-19 amongst the city’s homeless population were significantly higher than the general population. According to a joint study carried out by the Institut Pasteur and the charity Doctors Without Borders during the first phase of the pandemic, more than half of the people experiencing homelessness in the city had contracted the virus.

“Living in crowded conditions was the strongest factor associated with exposure level,” the authors concluded, adding the study “underscores the importance of providing safe, uncrowded accommodation, alongside adequate testing and public health information.”

Vaccination rates amongst people impacted by homelessness are difficult to obtain, but experts suspect they remain low. “Vaccination may not be very high in your list of priorities if your first issue is where do I eat and where do I sleep tonight,” says Benoit.

The pandemic did shine a spotlight, however, on the link between housing and health.

“As the pandemic was both a health crisis and a social crisis, it forced the two universes to meet and work together,” says Vitu, adding that different associations across the city have been working on providing vaccinations directly in shelters.

The most recent census – carried out in early February 2022 – counted 2,600 people sleeping out in Paris city centre, compared to 3,601 people counted in January 2020. Experts credit the 30% decrease to the swift response prompted by the first wave of the pandemic. Officials from charities, the City, and national government acted together to move through red tape, cut deals with the Paris hotel industry, and ensure essential services like food distribution continued. One area where the city continued to struggle, however, was in vaccinating people experiencing homelessness. The consequences made this group both at higher risk of catching Covid-19 and being shut out of any establishment that required people to show a vaccine pass to enter until the ‘pass sanitaire’ was scrapped in mid-March 2022.

* Rebecca Rosman is a freelance journalist who has been living in Paris for nearly a decade.