How can we improve access for people experiencing homelessness and disability? 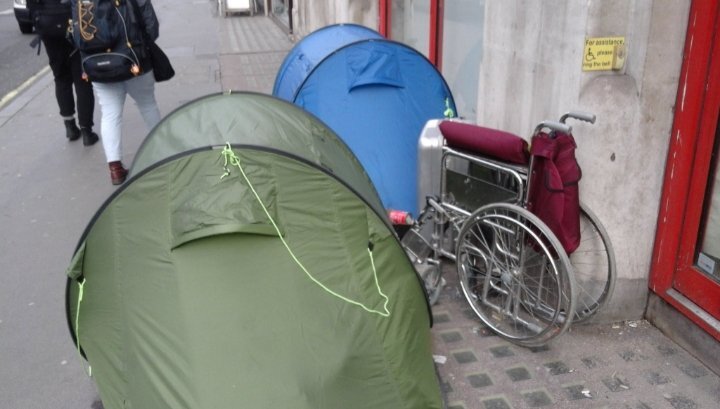 From April to June 2020, 13.7% of all households that were owed a homelessness relief duty by their local council in England also had physical ill health or a disability.

During winters I used to sleep in buses because I have severe Chronic Obstructive Pulmonary Disease and was in and out of hospital many times; it was warmer than the streets. They wouldn’t give me a nebuliser because I was homeless, even though it would have helped me.

I was over 65 and it’s hard to survive on the streets each day when you have multiple disabilities and need a stick to walk.

Over the years I have had many hospital discharge summaries. One of them literally said "has been homeless most of adult life”. I read it and thought ‘well yeah suppose I have’.

I was not allowed in most night shelters once they found out about all of my disabilities because of their health and safety regulations, it was a big risk for them, and they knew I’d been in and out of hospitals many times.

The homeless medical centre told me that they’d never known a patient with so much post from other medical services and appointments, my post box was always full.

Anything was better than nothing in terms of disabilities. I got some great support from a few soup runs with extra clothes that I needed desperately. For me personally the most useful thing was a walking stick with a comfy grip handle. I used to turn the handle around and use it as a seat, especially when the weather was cold. Breathing in the cold air when you have very advanced Chronic Obstructive Pulmonary Disease is hard, and your walking distance can be down to a few yards before you need to stop and rest to get your breath back. I went two winters like this and right through the so-called Beast from the East. It was really helpful because you can't always find a seat to sit on when you’re breathless or a building to hang to while you rest. It’s not good being incontinent and living on the streets, and then having to wait a year for an operation to cure it, which still isn’t solved, but the cause now is spinal injuries.

I was forever chasing clean waterproof incontinence pants which you can’t get if you’re experiencing street homelessness, the same as a nebuliser machine even if you have severe stage 4 Chronic Obstructive Pulmonary Disease and having many big flare ups due to chest infections and breathing cold winter air. So many times on discharge day nurses would wave goodbye and “see you next week” with another Chronic obstructive pulmonary disease chest infection knowing I had been discharged to the streets and there was nothing they could do as I was deemed stable for discharge by the consultant.

I got a bad gash on my leg that happened on the streets because I'm partially sighted. I’m blind in my left eye because I’ve got cataracts in both eyes but the left one is the worst. It’s a well known side effect from taking steroids to help with breathing. It was a raw leg wound, but I was patched up and right back on the streets. I walked into a ladder that was laid sideways on the ground. I saw it but just got one leg over it and banged the other one, hard.

Most day centres don’t have disabled front door access and it’s the same with many hostels, especially if you have a wheelchair, so there is a lot that I can’t stay in. One of the more popular ones has the front entrance up some stairs at the front, then all of the kitchen activities downstairs. Many of the smaller day centres are converted old buildings, but they all seem to have forgotten about disabled access. I can’t name one hostel or day centre which has a wet room for people with disabilities to shower.

There are many people in hotels at the moment that were previously sleeping on the streets, and I bet you the hotels are all clued up on the regulations concerning disabled facilities for people experiencing homelessness.

When you’ve got so much going on and then add your housing issues you have lots of balls to juggle - how do you do it?

It is vital that anyone who is experiencing homelessness and who also has a disability is able to access appropriate and safe accommodation that fully meets their needs.

WIthout this, support will only get more expensive and our options will become more bleak.

Don’t agonise...organise. You have to know where and what time different centres open and where the handouts are each day. Networking - we were doing it on the streets years before the word became popular. It even comes down to who's giving out the best clothes. As you may be aware, clothes (and fashion labels) are important on the street and they give you status. At the moment the big one is North Face.

Look after each other while COVID-19 is among us all, because it doesn't care about labels